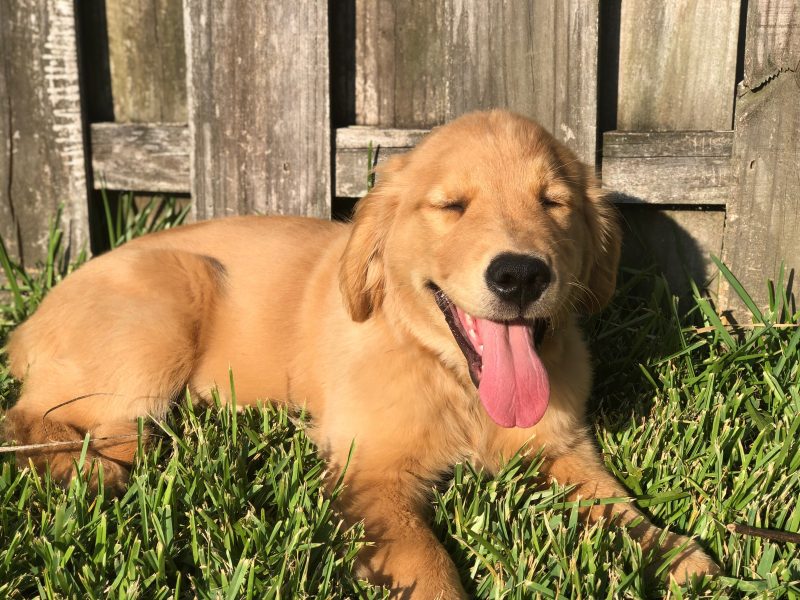 Potty training can seem like a daunting task.  However, if you follow these simple guidelines with a little time, consistency, and patience you’ll have a potty trained pup in no time!  Starting as early as possible is best, as once it becomes a habit for them to go wherever they want whenever they want, it is much more difficult (but not impossible) to break that habit.

What Do You Need?

Remember, you have 1.3 seconds for the dog to associate an action with a consequence, be it positive or negative.  This being said, supervision is key to potty training.  If you don’t catch him in the act, you can’t correct him (for going inside) or reward him (for going outside).  If you are not able to have an eye on your pup, he should be confined to a crate or exercise pen.

While potty training, the crate should be big enough for the dog to stand up, turn around, and lie down.  Dogs are naturally clean animals, and they don’t like to pee where they sleep.  If the kennel is too big, they have the option of peeing in one corner, and sleeping in another. 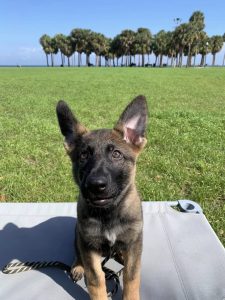 Every time you take your dog out of the crate, take him outside to go potty.  Take him out ALONE (if you have other dogs, keep them inside until after the puppy has done his business), and ignore him while he looks for a place to potty.  Do not engage with him…the outside world is a fun and distracting place.  So much so that it’s easy for a puppy to forget that he has to potty.  If the puppy is less distracted by his environment, he can concentrate on finding a place to go potty.  Some pups will just sit and stare at you, waiting for your next move.  If this happens, walk around slowly (still not engaging with the puppy), and hopefully walking around will encourage the pup to go.  While he is doing his business, repeat “Go potty, go potty, go potty,” (or whatever word you want to use) over and over again.  Try not to have too much excitement in your voice, as sometimes they get excited and stop going.  This ultimately turns into a command for the dog, just like sit or down.

Once your pup is finished outside, allow him freedoms inside the house, but still have him in an area where you can keep an eye on him.  If you’re pup isn’t in your eyesight and you aren’t engaging with him, he should be confined to a room or area where he is unable to get into trouble, and you can check on him periodically.  An exercise pen is a great way to keep your pup confined while still giving him space when you can’t watch him.  Remember, if you can’t catch him in the act of pottying in the house, you can’t correct him for doing it.  And the more times he gets away with peeing in the house, the more likely it is to become a habit.

As your pup becomes more reliable with letting you know he has to go outside, you can start expanding his space.  Be sure to keep an extra close eye on him when you do expand the space, though, as he may see this new area as an acceptable place to go.  Until my pup is fully potty trained, I have a sharp eye on him whenever we go to a new place. 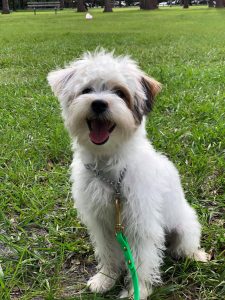 A good way to be able to gauge when they have to use the bathroom is by having them on a water schedule.  If you know how much and when the water goes in, you have a better idea of when it needs to come out.  If they have free access to water all day and don’t know yet how to hold their bladder, they are drinking little bits here and there throughout the day they are most likely having to pee little bits here and there throughout the day.  Don’t give him large amounts of water if you know you are about to leave.  Also, cut off water a few hours before bedtime.  A general rule of thumb is that however many months old a dog is, that is how many hours they are able to hold their bladder.  So a 3 month old puppy generally can hold his bladder for 3 hours.  If he is sleeping or not moving around much, that can usually be stretched out longer.  If he is active and running around, he will most likely have to go more often.

Peeing in the House

When you’re keeping an eye on your pup, watch for signs that he is looking for a place to potty.  Things like sniffing the ground, circling a spot, or continuing to go to the door.  Walk him outside and praise when he goes outside.  As soon as you see him drop to go in the house, give a sharp “No!” and walk him outside.  Hopefully the “No” is sharp enough to break his concentration, and enough of a negative to deter him from doing it again.  Be sure to walk him outside, and not carry.  It is just as important for him to know the path to get outside as it is for him to know to go outside.  If the “No!” is not enough of a negative to keep him from doing it again, you can add a noise like a loud clap.  If he ignores this still, you may need to add in a physical correction following the “No” such as a pop on the leash.  As with all corrections, you have to find what is enough of a correction to deter them from doing it again, but not enough to hurt or scare them.  If the correction is too great, hey may become fearful of something like the spot he was just in, or even you!

Training With a Potty Pad

Potty pad training is great for tiny dogs, especially if you live in an apartment where you don’t have immediate access to outdoors or if you are gone for longer during the day than is fair for the dog to hold it.  Tiny dogs have tiny bladders, and sometimes it’s not just about the dog not being potty trained, but the dog not physically being able to hold their bladder for that long.  Treat the potty pad the same way you treat the outdoors.  When the pup first comes out of the kennel, bring him to the potty pad.  Encourage him to stay on the pad until he uses the bathroom.  Then big reward and playtime.

Set up the playpen so there is a small area for him to sleep (I usually will put the crate in the playpen), a small area for him to play, and then the pad.  Pad holders are great because they help to show a clear difference between the floor and the pad, and also helps to deter the pup from grabbing the pad and playing with it.  As he starts to get the idea of going to the bathroom on the pad, you can start expanding the size of the playpen.  Gradually let the space get bigger, and again encourage the pup to go back towards the pad when he starts showing signs of having to go.  As you allow your dog more and more freedoms, make sure to continue showing him where the pad is.  It is easy for the dog to understand to go to the pad when it is right next to him, but can be a bit more challenging for him to have to seek it out in a big open space. 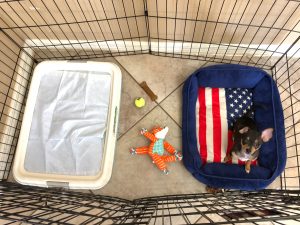 Stay up to date with what is going on at TLC and learn tips and tricks to having the happiest, healthiest, most well trained dog possible.